Quick build – about one week. If Bandai’s known for one thing, it’s for making kits that practically fall together with little effort. Part of the reason why this build was so fast is because I didn’t paint the Death Trooper’s armor. Bandai has some process where the plastic is coated in an incredibly shiny coating, so good that I can’t possibly have done a better job myself without a lot of effort. This is such a rarity that I decided to just enjoy the freedom and just build, for once. I spent some of that freed-up time taking care of smaller details, like painting the rifle to look more realistic, painting buckles and straps just to set them apart, etc. I also laid down a layer of Bare Metal Foil on the helmet’s green-tinted clear plastic, which I knew would look nearly black in the helmet. I then made a custom mix of Tamiya transparent blue and transparent yellow and gave the lenses and whatever are the shiny green openings (also clear green parts) in the chin of the helmet. I found a lot of pictures of figures with them lit, but I don’t remember these glowing in Rogue One, nor do any publicity photos of the real thing glow, so dark metallic green was fine for me.

One of the most visually striking moments of the film has been heavily publicized – the moment when a Death Trooper seeking young Jyn Erso finds a little Stormtrooper doll she’d been carrying. I decided to craft my own tiny replica out of some thick plastic sheet and plastic tubing. It’s not amazing or anything, but I think it really adds to  the effect of these guys being ruthless killers. At some point, I may consider making a small diorama with the Trooper standing in a grassy field, but for now I’m happy with it as it is.

All in all, I highly recommend these Bandai Star Wars kits, especially the figures which really can get by with no painting (if you really want – but paint really adds to these guys.) For about $25, you get an incredible replica that blows away the pre-made figures and toys you’ll find in your local stores. 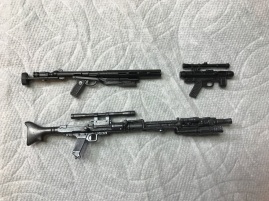